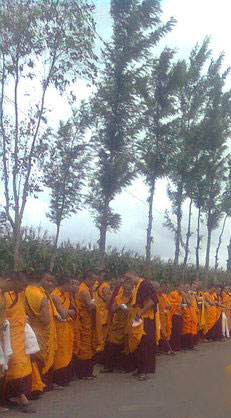 The Sixth Convocation Ceremony of Ngagyur Nyingma Institute was held at Namdroling Monastery on September 3, 2010. The institute confers baccalaureate to doctorate degrees and certificates of achievement to its academic community, and their convocation ceremonies are held in recognition of the institute’s graduates. His Holiness the 14th Dalai Lama inaugurated the ceremony by lighting the lamp in front of the main statue of Lord Buddha at the monastery’s Golden Temple.

We were also honored to host the esteemed Head of the Gelugpa Order, His Holiness Ganden Tri Rinpoche, and representatives of Head Lamas from the four Tibetan Buddhist schools as well as the Bonpo sect of Tibet. Government officials, including the Secretary of Higher Education for Karnataka State, and delegates from Arunachal Pradesh and Sikkim, as well as Bhutan and Nepal, were also among the dignitaries attending the event.

From 2004 to the present, a total of 421 students from the institute were granted certificates acknowledging completion of their postgraduate studies. Of those, 41 graduates were from the Thoesam Gatsel Institute of the Tsogyal Shedrupling Nunnery. The previous convocation of Ngagyur Nyingma Institute took place in 2003, during which Kyabjé Pema Norbu Rinpoche presided. Penor Rinpoche, the Eleventh Throne Holder of the Palyul Lineage, founded Namdroling Monastery in 1963, and Ngagyur Nyingma Institute in 1978. In March 2009, Penor Rinpoche passed into parinirvana.

This year, His Holiness presented the certificates and degrees to graduates. Speaking to the gathered assembly, His Holiness reflected: “Just as Namdroling temple is so immense, the sum total of monks and nuns who study here is also great.” His Holiness recalled Penor Rinpoche’s unstinting generosity and wholehearted dedication to benefitting all beings in every way possible: “Penor Rinpoche gladly offered anyone willing to devote themselves to study and learning at the monastery or its institutes the opportunity to receive an exemplary education.” The many graduates attending the convocation were a testimony to this fact.

We were also reminded of Penor Rinpoche’s all-encompassing pure view, ceaseless hard work and utter perseverance in all he aspired to achieve, and that in his honor it is now our legacy to maintain Rinpoche’s Dharma activity through our own hard work, faith and devotion, so that the Dharma may continue to flourish and benefit many beings.