Despite his weakening health, His Holiness Penor Rinpoche insisted upon traveling around the world to grant teachings and empowerments to all those who wished to receive them.

In 2008 he attended the Nyingma Monlam Chenmo, Losar in Namdroling Monastery, conducted a visit to Macau and Hong Kong as well as carrying through the summer retreat in the United States.

Despite his busy teachings schedule, His Holiness never stopped thinking of the well-beings of the young monks in his care. One cool January morning, he instructed a member of his household staff to drive him to Bangalore to shop. When there he ordered thousands of blankets. The monastery was chilly the winter of 2008 and His Holiness wanted to make sure that no monk was doing without a warm blanket.

In 2009 he stayed in the monastery until mid-January, when he visited Macau and traveled on to Bodh Gaya for the Nyingma Monlam Chenmo.

It was at Bodh Gaya that His Holiness health became noticeably more fragile. Although, when asked, Holiness responded that he was, in fact, fine, but that the accumulation of karmic causes and conditions were now conspiring together and creating the circumstances for us to perceive him in this way.

His devoted household attendants arranged for him to be flown to the finest hospitals and for some time His Holiness appeared to be improving. When he came to the temple on Losar morning, 25 February, for the first time, the severity of his condition became evident to all and tears flowed freely, even among the highest practitioners. 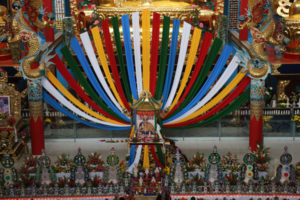 On 24 March His Holiness condition worsened and he was brought to the Columbia Asia Hospital in Bangalore. Following this, on 27 March, the first day of the second month, he returned to Namdroling Monastery. There all the close tulkus, khenpos, lopons, and other students sat with him. He looked around at them, closed his eyes, and departed from Cyclic Existence.