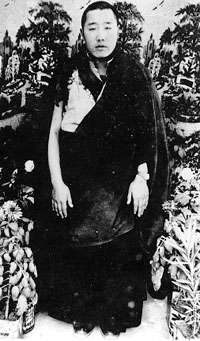 Every Tibetan dreams of making a pilgrimage to Lhasa, especially to see the famous Jowo Rinpoche, the “Precious Lord”, the holiest statue in the whole of Tibet. This statue depicts the Buddha as a prince at the age of twelve and is said to have been created while the Buddha was still alive.

In 1956, Penor Rinpoche, accompanied by a large entourage, set out for central Tibet. He was twenty-four years old. The party visited the great power places, monasteries, temples and sanctuaries of Tibetan Buddhism, including Samye, Dorje Drak, Mindroling, Drepung, Ganden, and Sera monasteries. Everywhere he went, Penor Rinpoche made generous offerings. He also visited HH the Fourteenth Dalai Lama at his winter palace, the Potala in Lhasa. From the Dalai Lama he received an empowerment of Long Life. The Lhasa Mönlam Chenmo was in progress, and he offered tea and distributed money to the entire assembly of monks.