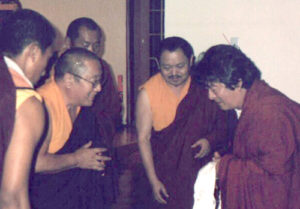 In just a single lifetime, His Holiness Penor Rinpoche accomplished an amazing amount on the outer level with the activities we can read about here on this website. Let it be said that there are accomplishments that are not listed here on the inner and secret levels as well. This biography only details a very small part of all that His Holiness Penor Rinpoche accomplished for every single one of us so that we might have the chance to connect with the ancient wisdom of Tibet. All that he did he did so the light of the Dharma would not go out from this world All that His Holiness did, he did for us with the hope that we would free our minds from negativity and open our hearts to true happiness. His one wish was always that each one of us would show realization and one day become enlightened. Every single thing he did, he did to help us achieve that single goal.

Namdroling Monastery has formed a committee to manage monastic affairs. Lead by His Holiness Karma Kuchen Rinpoche, the 12th Throneholder, this committee will be involved in the search for the new incarnation (or Yangsi).

In addition to His Holiness Karma Kuchen Rinpoche, the members of the committee include the two other Heart Sons and the three senior-most Khenchens from Namdroling. These are: His Eminence Khentrul Gyangkhang Rinpoche, His Eminence Mugsang Kuchen Rinpoche, Khenchen Pema Sherab Rinpoche, Khenchen Namdrol Rinpoche and Khenchen Tsewang Gyatso Rinpoche. This committee, when the time has ripened, will conduct the search for the next incarnation of His Holiness Penor Rinpoche. No announcement has been made as of June 2, 2009, as to the discovery of any instructions left by His Holiness Penor Rinpoche; but it is thought that such instructions most likely exist. As is traditional, portions of His Holiness households have been sealed until the appropriate time.

For you the visitor who has read through some or all of this biography, we apologize in advance for any of our errors. For whatever you find useful, it is only due to the kindness of His Holiness that it appears here. The text below is from Shantideva, talking about the compassion and loving kindness of the bodhisattvas, and such as that which His Holiness Penor Rinpoche brought into this world:

It is the supreme elixir
That overcomes the sovereignty of death.
It is the inexhaustible treasure
That eliminates poverty in the world.
It is the supreme medicine
That quells the world’s disease
It is the tree that shelters all beings
Wandering and tired on the path of conditioned existence.
It is the universal bridge
That leads to freedom from unhappy states of birth.
It is the dawning moon of the mind
That dispels the torment of disturbing conceptions.