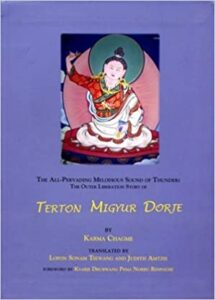 Tertön Migyur Dorjé (1645-1667) revealed the treasures that form the basis of the tradition followed by monastic and lay practitioners in Palyul monasteries and centers around the world today. He was considered to be a reincarnation of Palgyi Senge of Shubu, one of the ministers the 8th-century Tibetan King Trisong Detsen sent to invite Padmasambhava to Tibet. He was the immediate reincarnation Trulshik Wangdrak Gyatso (died c. 1640). Tertön Mingyur Dorjé is the revealer of the Namchö cycle of termas that encompass thirteen volumes of revealed treasures.

His anniversary falls on the 16th day of the third Tibetan month.