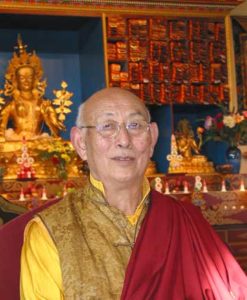 Kyabje Thubten Palzang Rinpoche (“Tulku Thubzang Rinpoche”), was born in the year of the Fire Rat (1936). He was discovered by the great Khenpo Ngawang Pelzang (also known as Khenpo Ngaga and Khenpo Ngakchung). This is the same renowned Khenchen who confirmed the recognition of our late Holiness, Drubwang Pema Norbu Rinpoche. Kyabje Tulku Thubsang Rinpoche entered his final meditation (Thugdam) on 10 January, 2021 and passed into parinirvana.

Tulku Thubsang Rinpoche was a younger classmate and dear friend of His Holiness along with Dzongnang Rinpoche. The three young tulkus studied and practiced as brothers under the direct guidance of Khenchen Ngaga and received teachings and empowerments together from many realized masters. As a youth, Tulku Thubsang Rinpoche was present when His Holiness Penor Rinpoche completed Ngondrö. He has described the single-pointed zeal and physical hardships endured without complaint through which His Holiness completed all of the recitations and accumulations.

Tulku Rinpoche’s humility is such that he would not want us to recite any of his own accomplishments. However, in order to benefit sentient beings, we publish the following.

Empowerment Lineage
Among the empowerments Tulku Rinpoche has received are Rinchen Ter Dzö (“Precious Terma Treasury”) from Chötrul Rinpoche and the Dam Ngang Dzö (“Treasury of Essential Instruction”), the Do Wang Drangtsi Chu Gyun (Anu Yoga Empowerment-“Continual Flow of Nectar”) from Khenpo Legshed Jordan. From Lungtog Rinpoche, he received all the Longchen Nyingthig empowerments and oral transmission teachings. From Khenpo Khyentse Lodrö, he received the Du Do Drelwa (Anu Yoga Commentary) and many other empowerments and transmissions.

Texts and Rebuilding Efforts
Tulku Rinpoche has spent the majority of his life in Palyul, Kham, overseeing the rebuilding of Palyul Monastery. However, while making sure we have the physical buildings where all can study and practice the teachings, most important has been his activity to save and preserve the texts of teachings. Through great effort, personal danger and the blessings of all the lineage masters, Tulku Rinpoche has managed to collect texts that were nearly destroyed. The Kama teachings, for instance, were scattered in personal collections throughout the local area and the world. These he assembled in the Palyul Library, and had re-carved into wooden blocks based upon the copies. He has also preserved some of the original wooden printing blocks of the Nam Chö which remarkably had escaped destruction through being mistaken for firewood by those who would do so. The original pre-1959 library held wood blocks for 50 volumes. Thanks to Tulku Rinpoche’s hard work, and with the addition of the Kama teachings, the library today holds printing blocks of more than 110 volumes. It has likely become the world’s largest wood block library for texts related to Kama collected in one place. Because of this effort, His Holiness Penor Rinpoche was able to obtain the texts required to carry through the series of retreats known as Liberation in the Palm of Your Hand, now regularly given in Namdroling Monastery and in the US Retreat Center.

Ritual Knowledge
Biographies often mention that Tulku Thubsang Rinpoche was renowned for his expertise in the detailed instructions of all the ritual activities such as Mudra (hand gestures) and Cham (sacred lama dance). This understates his mastery. It was because of his capacity to know all of the most minute details of the elaborate rituals for Drupchen (twenty-four-hour a day, seven-day prayer ritual) and Accomplishment Ceremonies that these teachings have been preserved. He also knew how to play nearly all of the sacred musical instruments and taught these. To understand the extent of his knowledge, we must know that ordinary aspirants generally can remember just one of the instruments. The monastic retreats within Palyul Monastery, Kham, are all also overseen by Tulku Rinpoche. Fortunately for us, Tulku Thubsang Rinpoche was able to confer these teachings to hundreds of aspirants, insuring they are remembered for generations to come. In this way, granting teachings and empowerments based on these texts and based on his knowledge of all of the rituals of Palyul, Tulku Rinpoche spent many years caring for and nurturing the entire Palyul lineage.

Free from the stain of partiality, Tulku Thubsang Rinpoche’s activities were like a great ocean of enlightened conduct for the benefit of the teachings and all sentient beings. For Palyul students, we knew him for his profound humility and for a devotion to and faith in His Holiness Penor Rinpoche so deep and so vast, it makes eyes tear and hearts tremble in appreciation to observe. In the region of Palyul, he has served as His Holiness Penor Rinpoche’s surrogate. Along with His Holiness, he was been a major contributor in preventing these teachings from falling into extinction.  Join us in praying for his Swift Rebirth (prayer here).