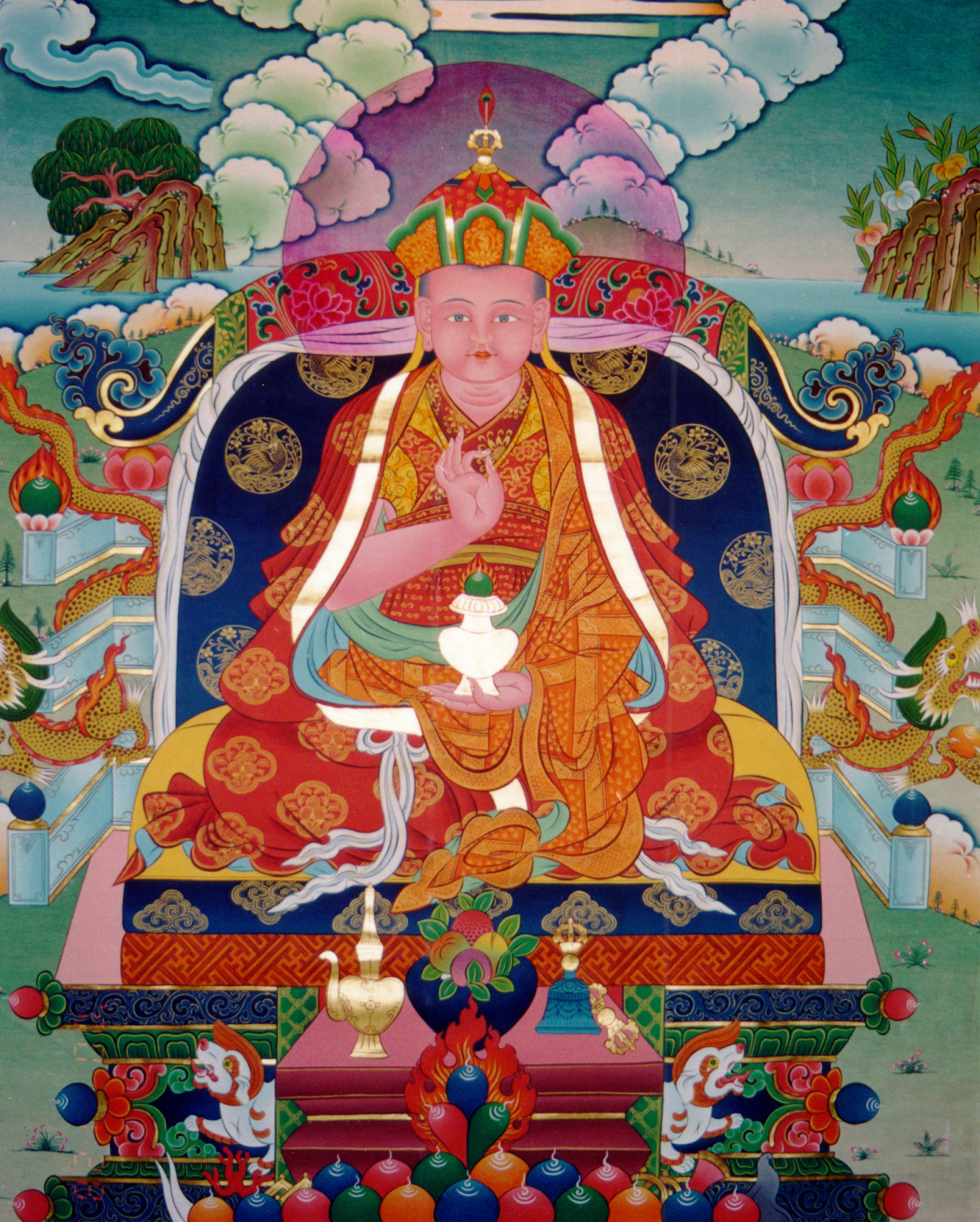 The first Drubwang Pedma Norbu Rinpoche was born in 1679, the eleventh rabjung year of the Earth Sheep, in Chagril. Pedma Norbu was an emanation of the great Pandit Vimalamitra and the Vidyadhara Terton Jatson Nyingpo.

As a child he met the Vidyadhara Tertön Migyur Dorje in Mugsang and received permission to practice the Nam Cho revelations. At the age of twenty-one, he met the Vidyadhara Kunzang Sherab and received from him as many teachings as he could. His principle root guru was Pedma Lhundrub Gyatso, the second throne holder, from whom he received full ordination and all the transmission of the lineages of Kama and Terma as practiced in the Palyul tradition. He accomplished and perfected the practices of the stages of clear light togyal and confidently realized the view of original purity, trekchod. Because of these accomplishments in practice, Pedma Norbu received the title, Drubwang, meaning Powerful Lord of Accomplishment.

Once Drubwang Pedma Norbu was invited by the Dharma King of Dege, Tenpa Tsering, to visit and bless his palace. During the visit, Drubwang Pedma Norbu said he would perform the Vajrakilaya lama dance, from the Sakya tradition. Although unfamiliar with this tradition having never practiced it before, Drubwang Pedma Norbu performed the dance flawlessly and several fortunate observers saw that his feet were not even touching the ground. Simultaneously, Sakya Dagchen Rinpoche, who lived far away in central Tibet , looked toward the east and said, “Today, in the eastern region of Kham, an Arya Bodhisattva is performing the Vajrakilaya lama dance, which will liberate the boundless sentient beings who see or hear of it.”

He received a vast number of teachings from many great masters, including exchanging empowerments and teachings from the earlier and later schools. He invited the omnisient Chokyi Jungney, Situ Rinpoche, to Dagor (Palyul), at which time he performed the long life sadhana and empowerment of Ratna Lingpa’s revelations, the entire Nam Chö, and Lama Gongdu Transmissions. In return, Situ Rinpoche gave Drubwang Pema Norbu the Anu Yoga empowerments.

In 1757, at the age of seventy-nine, the first Drubwang Pedma Norbu Rinpoche dissolved his mind into the great sphere of truth, producing astonishing signs. His sacred body was placed just as it was, inside a large wooden stupa, erected within the innermost chambers of his private quarters where it remained until the monastic compound was razed during the Cultural Revolution.