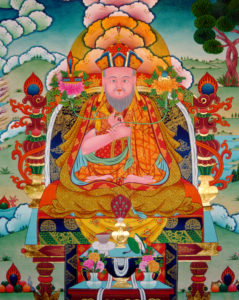 Kunzang Sherab was born in 1636, the eleventh rabjung year of the Fire Rat, in the province of Do-Kham in the region of Bubor. The name of the village in which he was born is Ah Chog. As a child, he possessed compassion for all sentient beings and never harmed even the smallest creature. Unlike ordinary children, he awakened his innate primordial awareness at an early age and was gifted with the ability to memorize many prayers. He underwent many hardships while doing his practices, including tying his head up by his hair at night in order to completely abandon sleep. With dedicated enthusiastic perseverance, he was able to actualize realization of the precious oral instruction he received from many great teachers and achieved the signs of true accomplishment on the path.

King Lhachen Jampa Phuntsog and Trichen Sangye Tanpa together built a new monastery and named it Palyul Namgyal Chanchub Choling. The King then sent a formal invitation to the great Vidyadhara Kunzang Sherab to be the head of the new Palyul Monastery. Kunzang Sherab asked his guru, Terton Migyur Dorje, who replied, “According to Guru Padmasambhava’s prophecy, the time has now ripened for you to work for the welfare of sentient beings. You must go to take charge of this monastery and it will become an exhaustless source of dharma, propagating the Nyingmapa Doctrine.”

In 1665, the eleventh rabjung year of the Wood Snake, Kunzang Sherab was in his thirtieth year when he arrived at the new Palyul Monastery to assume his position. He skillfully cared for and guided the sentient beings that met him. A great number of his disciples actualized signs of accomplishment through their meditative experience. Several disciples retreated to uncertain places to accomplish and actualized the Great Perfection tradition of transferring from this world. It is known that several of these disciples actually accomplished the rainbow light body.

In 1699, on the fifth day of the year of the Earth Rabbit, at the age of sixty-four, after partaking of his midday meal, Kunzang Sherab dissolved the rupakaya (form body) into the great sphere of truth. The moment he passed away, the weather became unseasonably warm and sprouts and buds suddenly bloomed. His principal disciples, along with three thousand monks, performed extensive offering prayers in his honor. During this time, the majority of disciples experienced unceasing clear light awareness. While his body was being cremated, celestial clouds mingled with rainbows to fill the pristine sky. A self-originating syllable AH became embossed on his skull and many images and precious bone relics were observed. A stupa, one story high, made of stone and mud and covered with gold, was erected to contain his precious relics, as well as the Longsal Terma of Avalokiteshvara.