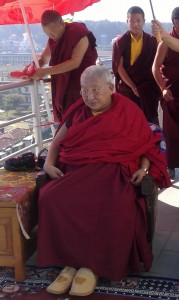 During the gathering for the 23rd Annual Nyingma Monlam in Bodh Gaya early this year, at a conference of major Tulkus, Khenpos and monks from all the monasteries, a decision was made to find the next Supreme Head of the Nyingmapa and to ask both Kyabje Dodrupchen Rinpoche and Kyabje Tsetrul Rinpoche if they would accept this position. Accordingly, Shechen Rabjam Rinpoche (Shechen Monastery), Dzogchen Rinpoche (Dzogchen Monastery), Kathog Getse Rinpoche (Kathog Monastery), Gyangkhang Tulku Rinpoche (Palyul Monastery), and Khokhyem Rinpoche (Mindroling Monastery), and together with two other Nyingma officials went to Sikkim and approached Kyabje Drodupchen Rinpoche. However, Kyabje Drodupchen Rinpoche declined stating his old age and health precluded him from being able to accept the position. They then proceeded to Simla and approached Kyabje Taklung Tsetrul Rinpoche and after much persuasion, he finally accepted the position.

Kyabje Taklung Tsetrul Rinpoche is the third incarnation born in Nakartse in Yardrok. His father’s name was Namgyal Dorje. Mother was Dorje Dolma. Born with all the auspicious signs in 16 Rapjung Me Yoe (the fire rabbit year, 1926 according to Western calendar), the 9th Dadrak Rigzin Chenmo (called Thubten Choewang Nyamnyi Dorjee) recognized him as the reincarnation of the previous Tsetrul Rinpoche. When he was five years old he was brought to the Taklungtse Dratsang. Then he took refuge vows from the previous Dodrak Chuzang Rinpoche, Pema Ngedon Tenpai Nyima, giving him Shedup Nyingje Thinley Wangpo as his name. He was then enthroned to the right position as Yangsi of Tsetrul Rinpoche.

His teacher Kunsang taught him reading, writing which he learned without any difficulties and then onwards he moved to main Dorje Drak monastery where he learned all the practices of Northern Treasures (Jangter) and become an expert.

He received novice (Getsul) ordination from Minling Dorzin Namdrol Gyatso. Later on from Minling Khenchen Ngawang Khyentse Norbu Rinpoche he got the full ordination (Gelong) vows. Ever since he has been receiving empowerments, transmissions and teachings from all the various prominent masters within the Nyingma tradition thus becoming a master of all those teachings himself.

Kyabje Tsetrul Rinpoche and Kyabje Penor Rinpoche have close respect and connection with each other. Kyabje Tsetrul Rinpoche gave the full Jangter (Northern Treasure) empowerments to the Sangha of over 3000 monks at Namdroling Monastery upon request from Kyabje Penor Rinpoche. He has visited Namdroling on a few other occasions also to perform major ceremonies.

His autobiography is here: