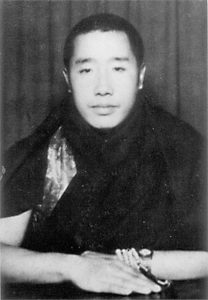 Penor Rinpoche studied with many lamas, benefiting most deeply from the warm and close relationship he enjoyed with his great master, the Second Chögtrul Rinpoche. At his lay ordination, Chögtrul Rinpoche gave him the name Thubten Lekshe Chökyi Drayang, “Upholder of Buddha’s Teaching with the Eloquent Speech of Melodious Dharma.” At Dago retreat monastery, he received and engaged in the Namchö Dzogchen preliminary practice teachings of Sangye Lakchang, “Buddha in the Palm of the Hand.” He also learned general subjects, including writing, poetry, astrology and medicine, and went on to study the sutras with Khenpo Nuden, Khenpo Sonam Dondrup and Khenpo Gondrup.

At the age of thirteen, he received novice (getsul) ordination and with it the name “Dongak Shedrup Tendzin Chokle Namgyal” (All-Victorious Holder of the Teachings of Study and Practice of the Sutras and Tantras). At twenty-one he took full (gelong) ordination with his master at Tarthang Monastery and received a vast number of teachings covering all the essential instructions and empowerments of the Nyingma tradition. This lineage of the vinaya is a very pure one, transmitted to Tibet by Shantarakshita during the time of Padmasambhava.

At the time of his ordination, Chögtrul Rinpoche offered Penor Rinpoche the yellow robe that had been treasured and handed down by generations of lineage holders. Despite the tremendous difficulties of escaping from Tibet, Penor Rinpoche was to carry this robe with him all the way to India while leaving behind many other precious possessions. As a direct result, during his life in exile he was able to ordain more than 10,000 monks and nuns, so making a priceless contribution towards the stability of the vinaya vows and Vajrayana practice during this age of degeneration.

From the great Khenpo of Kathok monastery, Khenpo Lekshe Jorden, Penor Rinpoche received many transmissions. One special one was the Kham tradition of the Anuyoga empowerment of the Do Gongpa Dup through Mokton Dorje Palzang’s famous empowerment ceremony “The River of Honey.” Penor Rinpoche also received the ancient tradition of Kathok monastery and at the same time the empowerments, transmissions and teachings of Jamgon Kongtrul’s “Treasury of Essential Instruction;” Tertön Dorje Lingpa’s “Condensed Utterance of the Lama;” the Dorje Lingpa terma “Hung Kor Nyingtik;” Ngari’s Complete Condensation of Kagye; and Lerab Lingpa’s great terma revelation, the cycle of Tendrel Nyesel. The transmissions he received from Karma Kuchen Rinpoche included Nyelpa Delek’s Anu Yoga empowerment from the Rinchen Trengwa tradition.

Another of his teachers was Khenpo Khyentse Lodrö, also known as Khenpo Nuden, from Kathok. In a forest above the Dago retreat centre, Khenpo Khyentse Lodrö performed the Drupchen of the Anuyoga Dupa Do, at the same time giving the very first transmission of his newly written four volumes on Anuyoga. Khenpo told the following story. Before the second Drubwang Pema Norbu had passed away, he had given the Khenpo a small knife. At the time he had not given it much thought, but now he realized what this had really meant. The knife represented the sword of wisdom, and when he handed it to him, it was as if Pema Norbu was granting the Khenpo his blessing to finish writing these important new treatises, so as to be able to transmit them to his next incarnation.

From Khenpo Pema Jigme, a learned Khenpo from the Palyul tradition in Golok, Penor Rinpoche received the nine volumes of Jigme Lingpa’s collected works, the thirteen chapters of Karma Chagme’s “Ah Cho” and the collected works of So Wangdrak Gyatso. While he was receiving this transmission, Penor Rinpoche began to make intricately woven knots in blessing cords with his tongue, something which is done only by the most highly accomplished masters. He continued to make these special blessing cords until 1958. They were renowned for affording powerful protection when worn. One such cord is kept and treasured by one of his attendants today.

Around this same time, Penor Rinpoche happened to write the syllable Ah on a white conch shell. Once the ink had worn away, the syllable remained embossed on the shell. This shell is still kept as a object of veneration in Palyul monastery in Tibet.

Having received all the transmissions of the Kangyur and Tengyur, as well as completing a Vajrakilaya retreat, Penor Rinpoche entered into retreat with his master Chögtrul Rinpoche. To go into retreat with one’s own teacher is a rare privilege enjoyed by very few. Penor Rinpoche spent four consecutive years in retreat at Tarthang Monastery in the same room as his master. Already elderly and with failing eyesight, Chögtrul Rinpoche endured great personal hardship in order to give Penor Rinpoche virtually all the transmissions practiced in the Palyul tradition emphasizing the empowerments, transmissions and secret oral instructions of Tertön Migyur Dorje’s Namchö and the terma revelations of Ratna Lingpa.

Beginning with Ngöndro, up to the most profound innermost teachings of Dzogchen, he stressed every practice until the naked truth was revealed to his young disciple. He said, “If I am not able to transmit all the empowerments, transmissions and teachings to the third Pema Norbu Rinpoche before I leave this world, then this precious human life of mine will have been wasted.” With the constant guidance of his master, Penor Rinpoche successfully completed all the stages of the practice, accomplishing the root recitations of the Three Roots (lama, yidam, and khandro), the Namchö preliminary practices, tummo and tsalung, and the actual foundation practice of the Dzogchen “Buddha in the Palm of the Hand”, including trekchö, clear light tögal, inner tögal practice, darkness practice, and training in the dream state, the nature of sound and the pure realms.

HH Dilgo Khyentse Rinpoche once said, “Penor Rinpoche is a saint who has transcended the boundary of samaya.” By this, he meant that Penor Rinpoche had actualized the experience of inner wisdom, and so realized the state in which there is nothing to grasp and nothing to release.