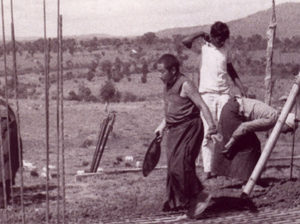 Establishment in South India
The purpose behind Penor Rinpoche’s escape from Tibet had always been to keep alight the bright flame of the Buddha Dharma and so release sentient beings everywhere from the darkness of ignorance. Immediately upon reaching southern India he poured all of his energy and effort into creating a center where the transmission of the Nyingma teachings could be maintained unbroken and where the great living tradition of Palyul could be reestablished. In 1963, the year of the Water Hare, in Bylakuppe, South India, Penor Rinpoche began to build the monastery of Thegchog Namdrol Shedrub Dargyeling.
This was a task of enormous difficulty. The entire sum that Rinpoche had at his disposal to rebuild his whole life, his monastery and his tradition, was 300 rupees. But he had one resource which was unlimited and insurmountable — his tremendous courage and resolve.

At that time, there were only a handful of monks. Those around him who could not grasp the scale of his vision kept insisting that he reduce the size of the monastery he was planning to build. Today, when hundreds of monks stream into the assembly hall to find there is no room for them to sit, one can only wonder at Penor Rinpoche’s extraordinary foresight three decades ago.

Few masters of Penor Rinpoche’s status would have undergone the hardships he endured. Beneath the scorching heat of the Indian sun, he would carry stones, bricks and sand, and mix the cement until his hands and feet bled and became infected. Lack of water and roads made construction work even more difficult.

In the early days, he lived in a tent, making Tibetan tea with cheap cooking oil, as he had no butter, and drinking out of a tin can. An old woman found him one day digging all alone deep in a trench, making a toilet for one of his students who was in retreat. When people like this saw Penor Rinpoche raising the monastery with his bare hands, they thought at once of Milarepa and his solitary toil to build a ten-story tower for his master’s son.