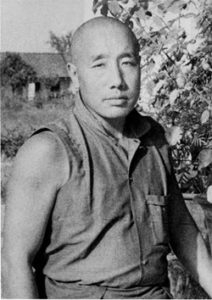 When Penor Rinpoche returned to Palyul late in 1956, the situation in Kham had become very tense. The lineages that had over thousands of years preserved the purity and authenticity of the Buddhist teachings were in danger of being broken and lost forever. Foreseeing this, and at the bidding of his protective deities, Penor Rinpoche fled with a party of three hundred towards the northeastern frontier of India. It was to prove a long and fearful journey, full of tragedy and immense hardship. In the end, only thirty survivors reached India.

Penor Rinpoche’s protective deities guided him every step of the way. His group was pursued by soldiers. Bullets would fall at Rinpoche’s feet and hand grenades would roll right up to him. But they would only explode after he had moved away to safety. Hungry for food, some of the party would kill animals to eat, but Penor Rinpoche could not bear to see innocent animals being slaughtered and so would walk ahead of everyone else to drive away potential victims. Finally they reached Pema Köd and the east Indian state of Arunachal Pradesh. During 1960, more and more refugees poured into India and in 1961, Penor Rinpoche, with approximately six hundred people, moved south to Mysore.