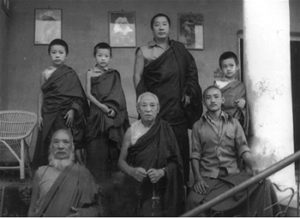 Activities in the 1980s
Year after year, with inexhaustible energy and determination, Penor Rinpoche kept working, oblivious to the numerous obstacles and hardships that confronted him. The importance of these activities to the preservation of the traditions of Tibet can not be understated or underestimated. Without the hard work of His Holiness Penor Rinpoche, it is certain that these practices were in danger of being lost forever.

At Namdroling monastery, he established the following traditions: Sojong, the bi-monthly purification ceremony; Yarney, the rainy season retreat; Gaye, the special practice performed at the conclusion of Yarne; Terton Karma Lingpa’s “One Thousand Offerings to the Peaceful and Wrathful Deities,” the Vajrasattva Accomplishment Offering Ceremony; Terton Ratna Lingpa’s Vajrakilaya to expel negativity at the end of the old year; the Drupchen of One Hundred Million Recitations using different mandalas each year; the Anu Yoga Offering Drupchen of Tsokchen Dupa; the Great Dharma Medicine Accomplishment (Mendrup) Ceremony and many others. During one of the Mendrup rituals Penor Rinpoche was conducting, the practice of Nyingtik Palchen Dupa, a number of monks saw rainbows around the mandala and nectar overflowing from the skull cup.
His Holiness returned to Tibet in 1982 for the first time in more than twenty years. Endlessly and tirelessly he fulfilled the requests of the people throughout day and night. It is said that some practitioners even waited to pass away until Holiness arrived so they would receive his final blessing.

While in Tibet, His Holiness carried through activities to preserve and propagate the Dharma. He renovated many monasteries that were destroyed during the Cultural Revolution, gave empowerments, transmissions and teachings to thousands. He also laid the foundation of the future by ordaining many monks and nuns.

Through this and three visits that followed, His Holiness revitalized the teachings in Tibet. Stories of the miracles that occurred while he was in Tibet abound. For example, he gave an empowerment in the Gonjo region of Kham to thousands of people without once having to refill the ritual vase (Bhumpa). But perhaps the most important miracle is that, out of ashes, today Palyul Monastery and branch monasteries in Tibet are thriving.

While in Tibet he obtained many rare and sacred texts from the Nam Cho cycle. When he returned to India in 1983, he had hundreds of copies of the newly acquired and complete Nam Cho as well as Ratna Lingpa’s revelations as well as other important texts from the Palyul tradition.

In 1984 he gave the first empowerments of the Namchö and Ratna Lingpa revelations in India. Present to receive these teachings was the twelfth throne-holder, His Holiness Karma Kuchen Rinpoche. 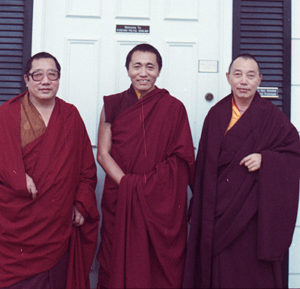